The African penguin fading away towards extinction

When Vasco Da Gama first rounded the Cape of South Africa a few hundred years ago, African Penguins numbered in their millions. Today, the global population stands at only around 30 000 pairs and with the population of this iconic seabird falling at 20% per annum (equating to a loss of 200 pairs per week over a period of 100 years), the African Penguin is at a greater risk of extinction than rhinos!

It is the only penguin species to breed on African shores and its distribution is largely restricted to the cold waters of the southwestern coastline where it mainly breeds on the scattered offshore islands of South Africa and Namibia. Currently, there are also two mainland-breeding colonies at Boulders Beach in Simonstown and at Stony Point at Bettys Bay. Populations are declining in the west of the penguins range and currently Algoa Bay is the most important global stronghold for the species.

Back in history and with the arrival of Bartholemeu Diaz in 1487, the penguin became a ready source of meat and eggs for ships larders and penguin carcasses were also rendered down for both fat and as fuel for ships boilers. Then, in the 1840s, the South African guano rush started and seabird guano became known as “white gold”. This guano was scrapped off from all of the offshore breeding islands to be transformed into nutrient rich agricultural fertilizer, leaving bare rock behind and stripping the penguins of suitable nesting sites. It was these harvests that left the single largest negative impact upon the African Penguins and accelerated their declines. As if this was not already enough of a threat to the birds, the beginning of the 20th centaury, saw the wholesale collection of penguin eggs for museum collections and for food. The eggs were initially collected as a cheap source of protein for the poor and over time as the eggs became increasingly scarce they became a luxury food.

Today, egg collection and guano harvesting is illegal and currently, the largest threats facing the penguins are the overharvesting of small pelagic fish which is their main food source. With South Africa also lying on one of the worlds major shipping lanes, the birds are also at high risk to oil pollution. In June 2000, the bulk oil carrier MV Treasure ran aground between Robben and Dassen Islands. 20 000 African Penguins were oiled in this disaster.

Thankfully today, intensive efforts are now underway to conserve this endemic species and conservation agencies and NGOs are working hard to halt the decline in numbers. They are tackling the problem by working both to declare marine protected areas within the penguins range and are working with commercial fisheries to reduce fisheries impacts around the penguins breeding islands. The African Penguin is an indicator to marine ecosystem health and their decrease is a warning signal for our economy, quality of life, jobs and other social impacts! 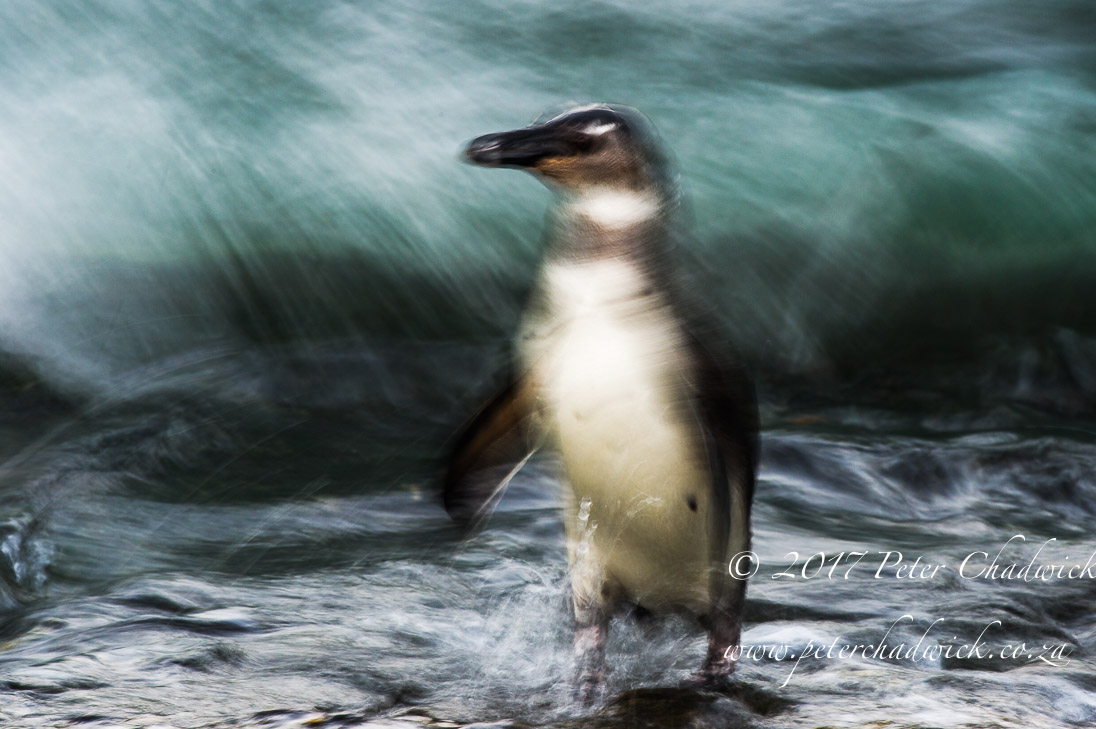 1 of 14: A juvenile African penguin emerges from the sea at dusk. 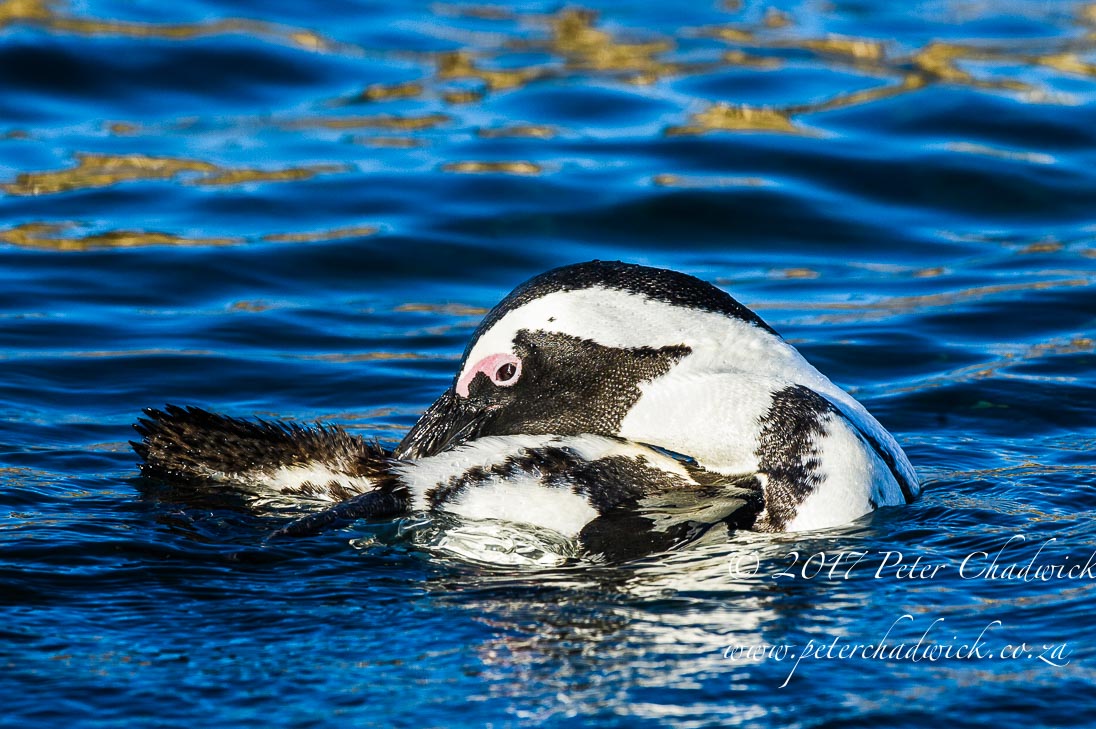 2 of 14: At the end of the day, an African penguin carefully bathes and preens. 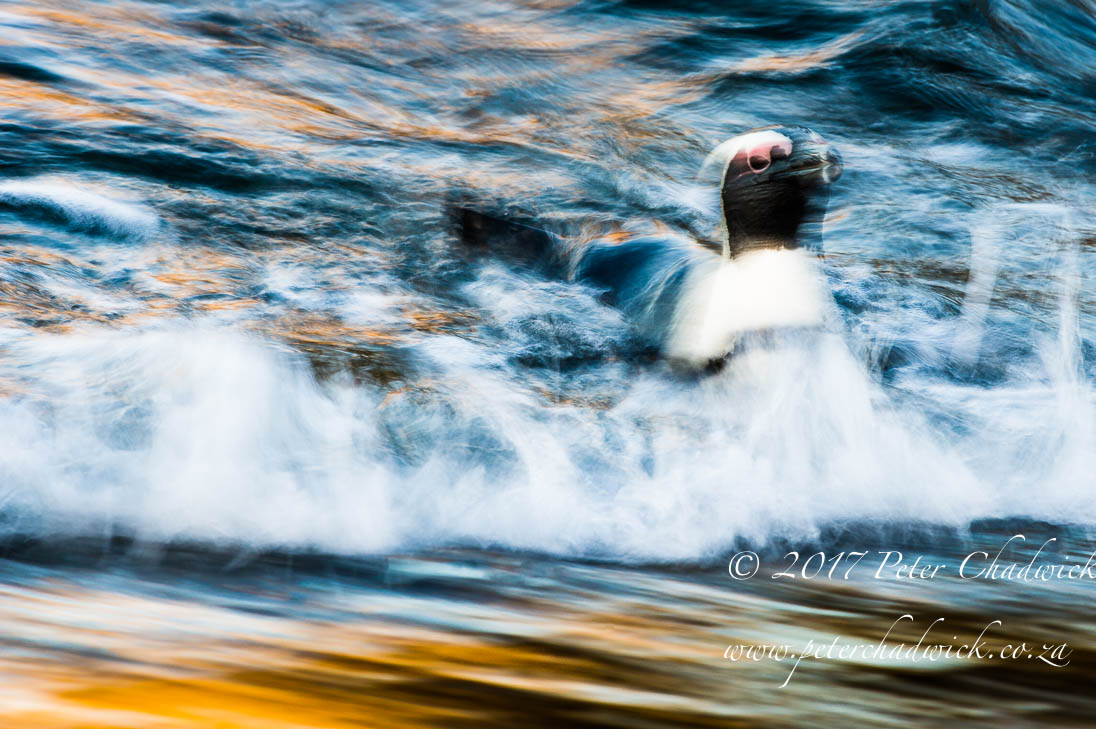 3 of 14: An African penguin surges ashore with a breaking wave. 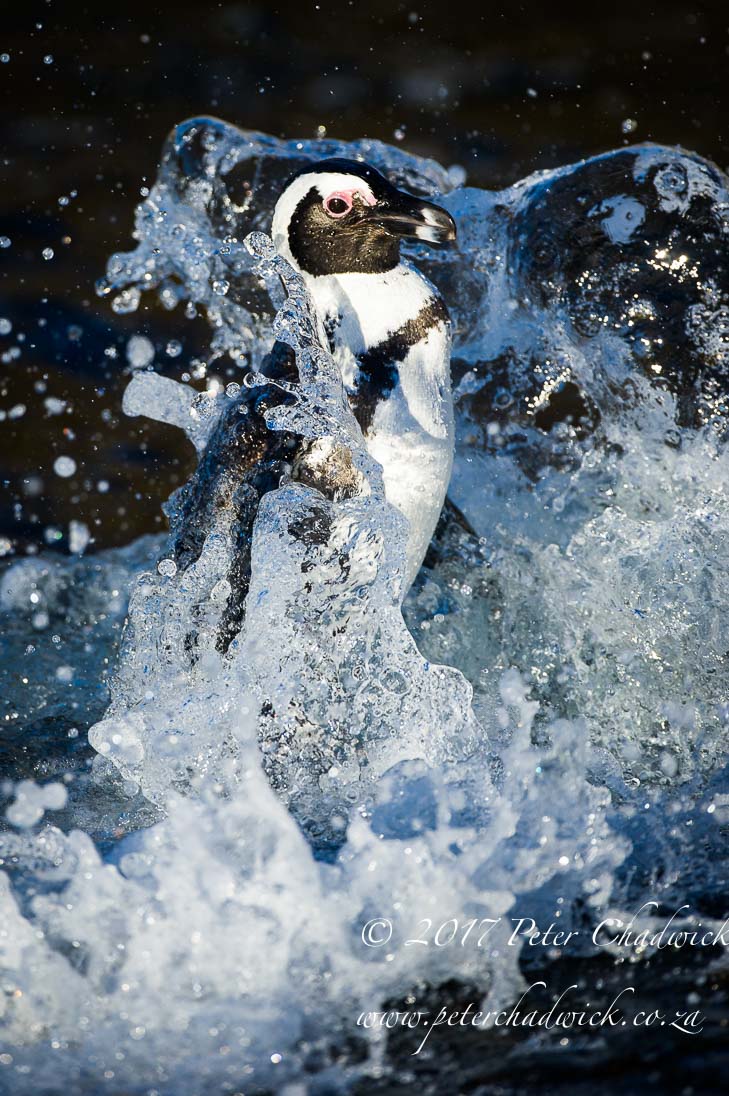 4 of 14:A wave breaks over an African penguin as it comes ashore at the end of a day. 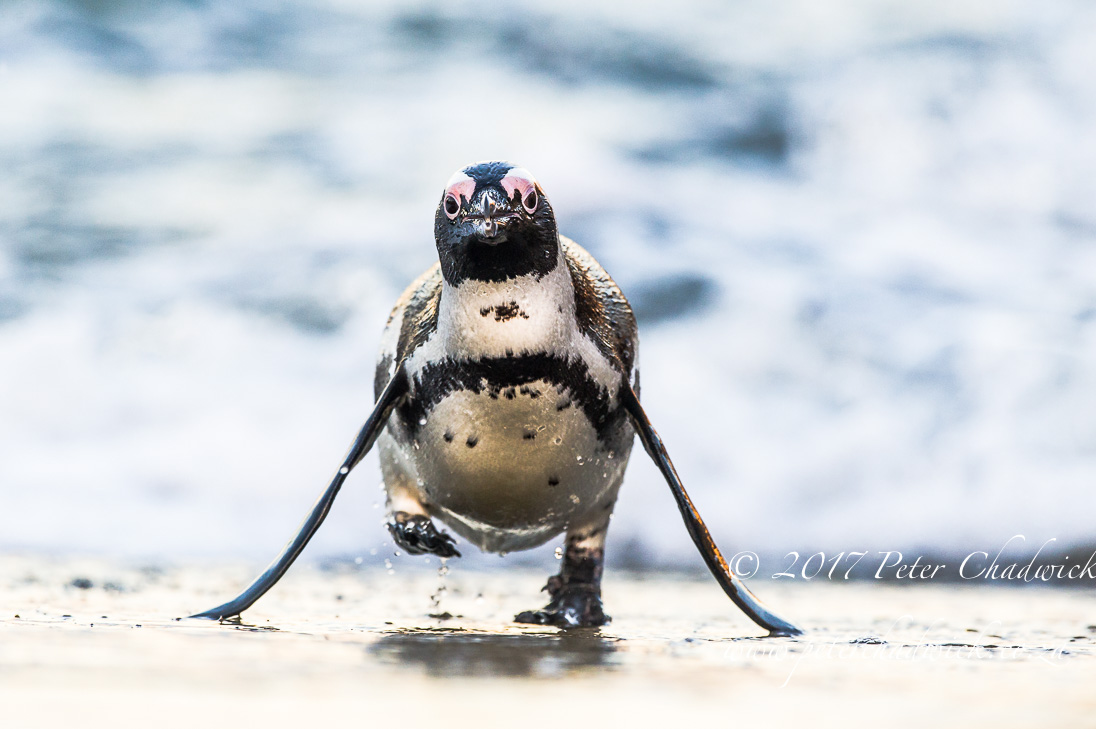 5 of 14: After having spent the day out at sea feeding on small fish, an African penguin returns to its breeding colony. 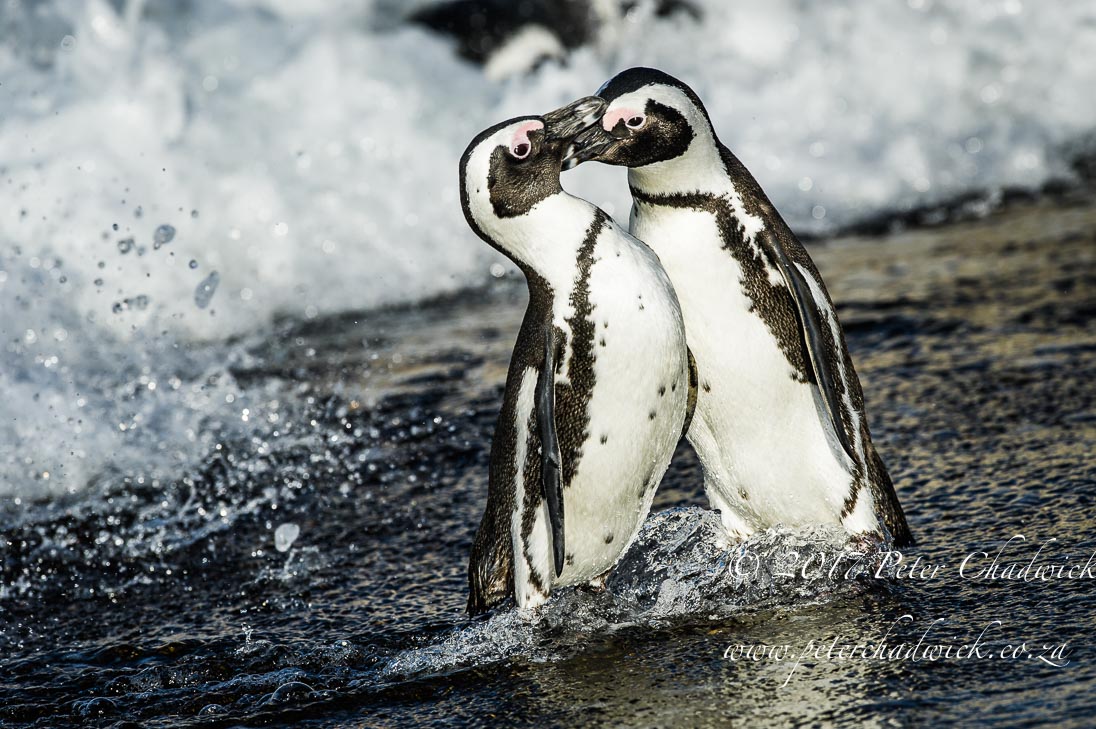 6 of 14: Two African penguins fight breifly as they come ashore. 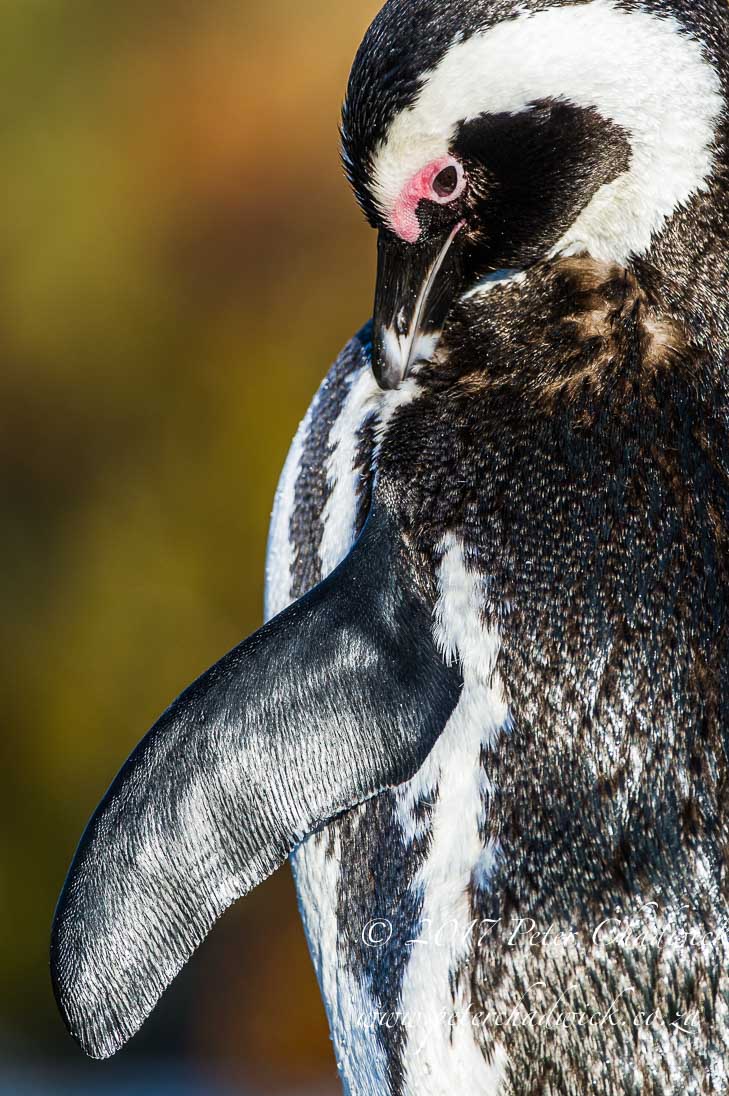 7 of 14: Careful preening keeps the African penguins feathers in good order and waterproof. 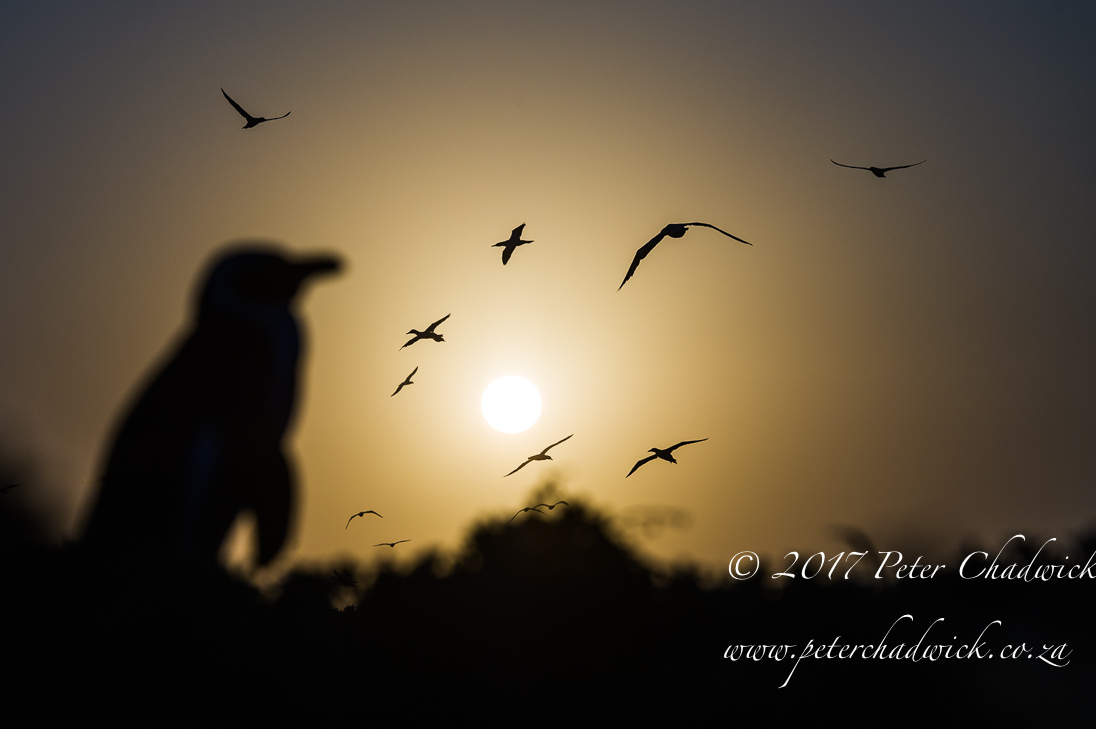 8 of 14: An African penguin stands at its burrow entrance at dusk as Cape gannets circle overhead. 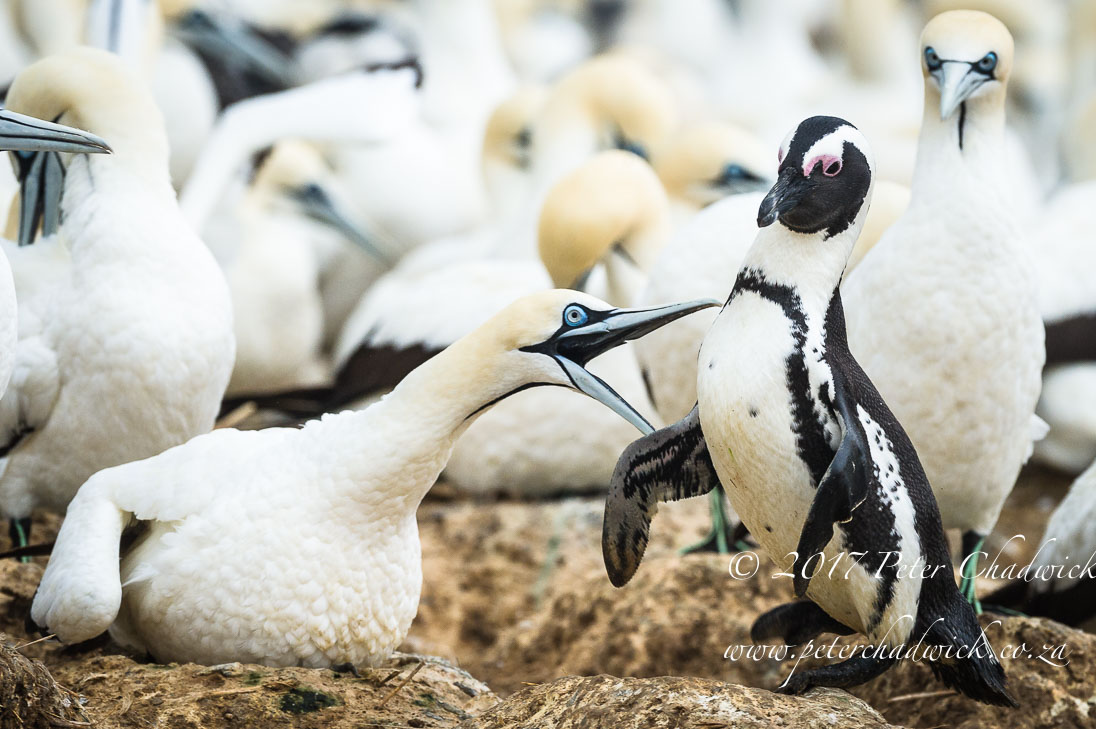 9 of 14: An African penguin foolishly wanders into close proximity of nesting Cape gannets who are quick to attack the intruder. 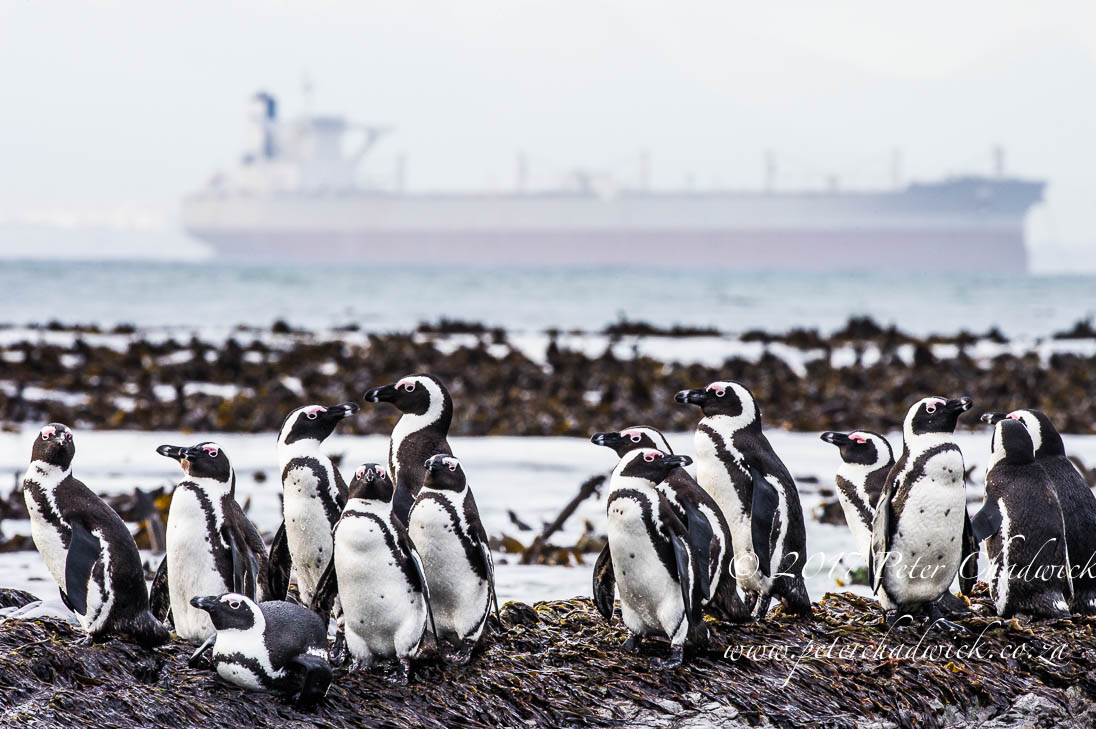 10 of 14: Seabird breeding islands off the South African coastline are all in close proximity to major shipping routes. This could be catostrophic if there was an oil spill. 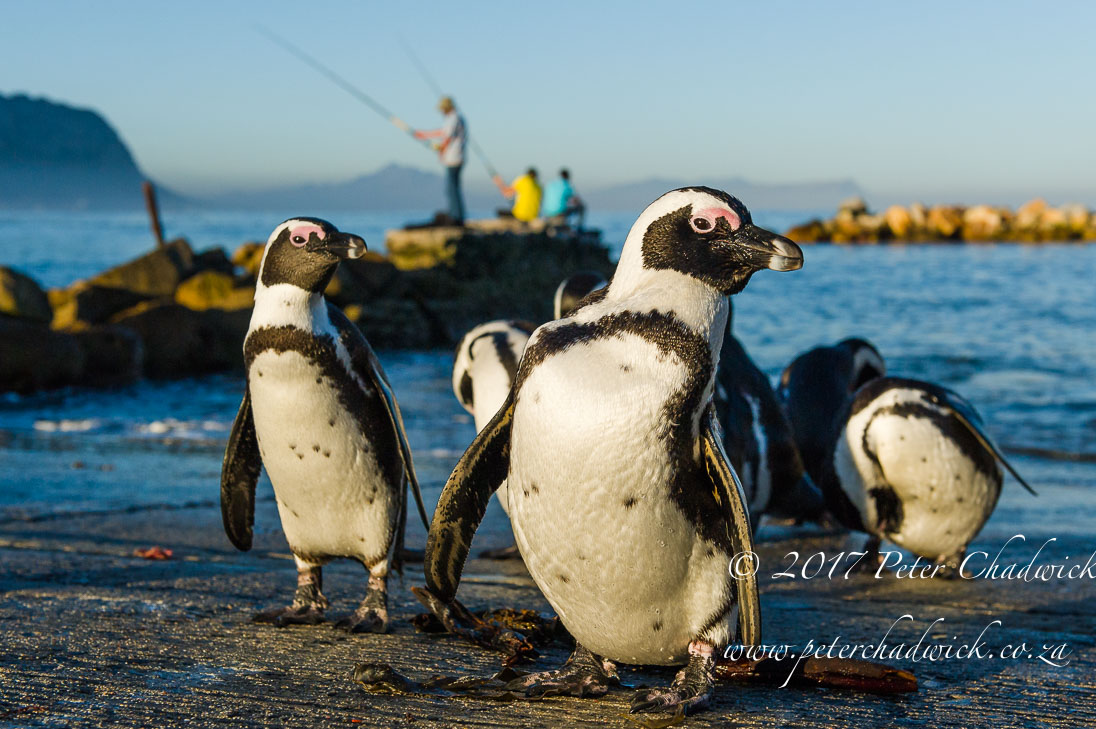 11 of 14: African penguins have to compete with increasing fisheries for their food sources. 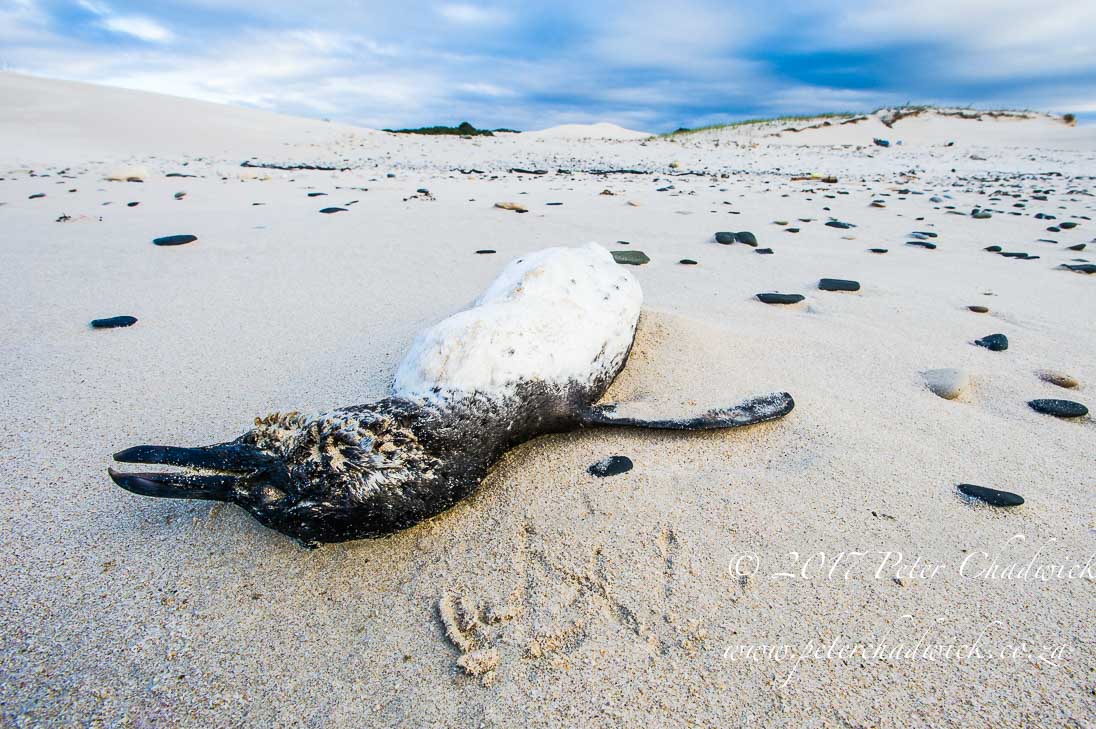 12 of 14: Overfishing and the lack of food availability is placing increasing risk on penguins and juveniles are particularly hard hit with many not srviving their first year. 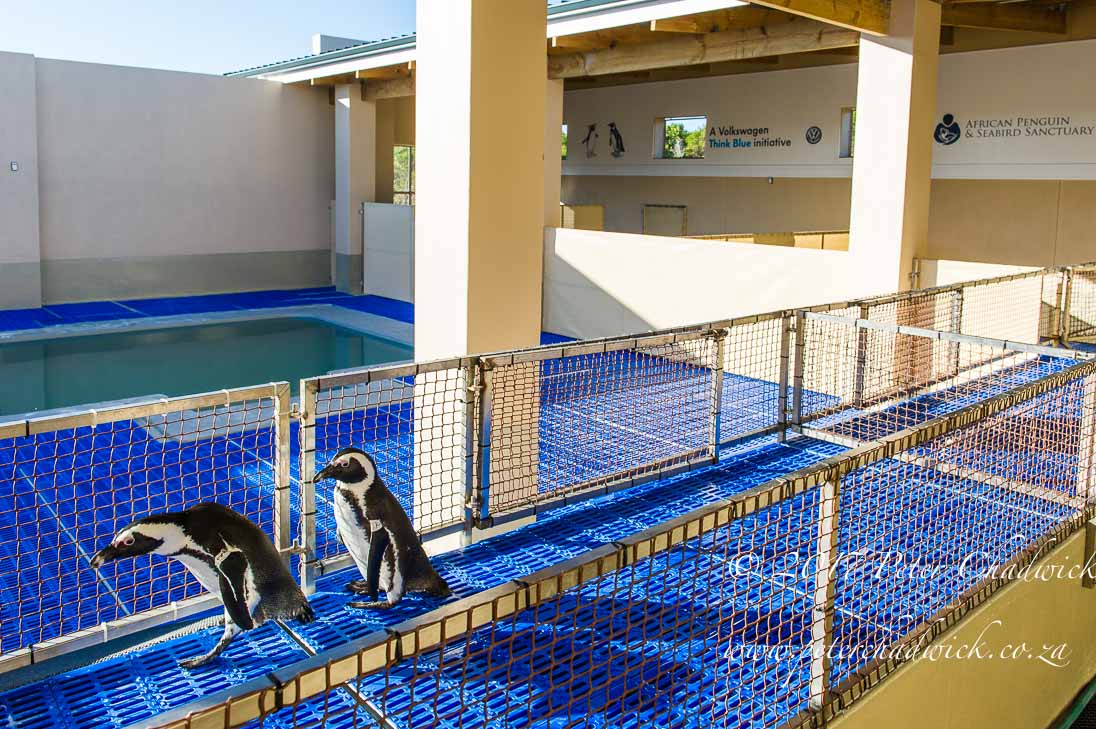 13 of 14: African penguins recover from injury and illness at a strictly controlled and designed rehabilitation center. 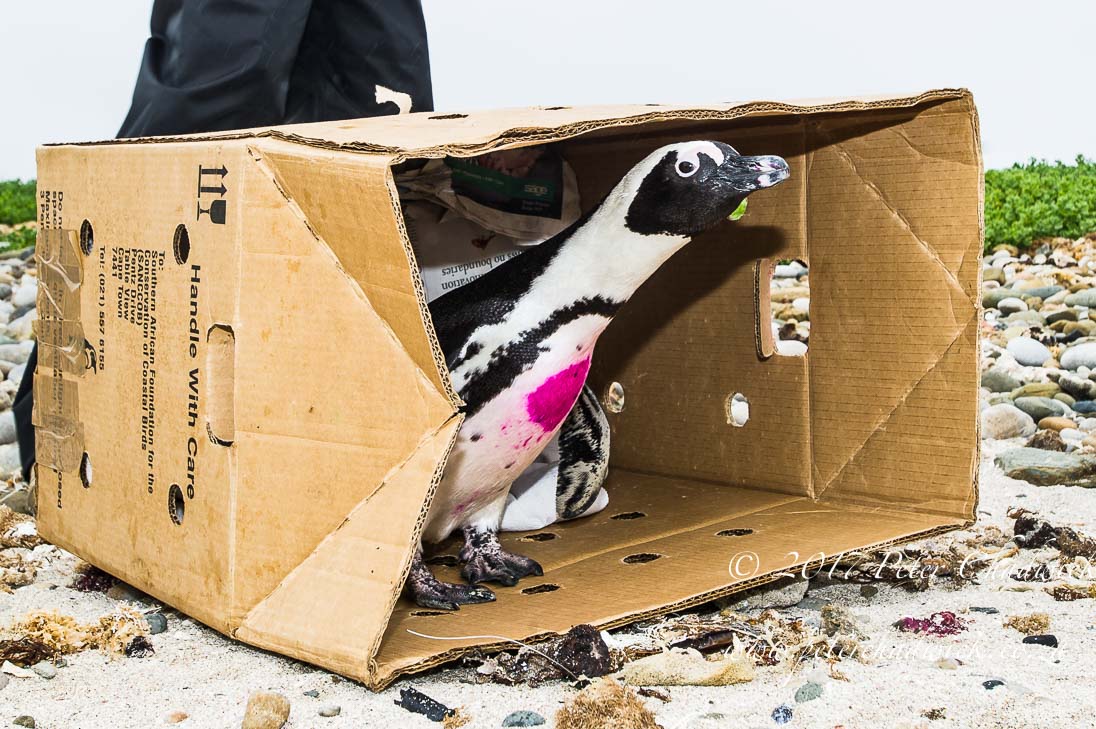 14 of 14: An African penguin is released back at its breeding colony after having been rehabilitated from illness.